Should I Burn This Book?

So far I’m only three chapters into Bruce Holsinger’s newly released novel, A Burnable Book, but already I can see that it has one major, tragic flaw:  I didn’t write it.

I should have known better than to start in on this book just a day after giving a second draft of my novel to my wise and wonderful beta reader, Teresa. I should have known that I would compare my writing to Holsinger’s, that I would wish I were as adept at conjuring the past. It made me feel like burning A Burnable Book. (Not really, of course–more like putting my bookmark in chapter three and relegating it to the bottom of my Sisyphean “to-be-read” pile.)

The mature and commonsensical part of me knows that I should reading MORE writers of historical fiction, that I should consider it an apprenticeship, honing my craft by adopting successful techniques and learning to avoid the genre’s pitfalls.

But despite that knowledge, the insecure little scribbler inside of me quakes when I read authors whose work I hope to emulate. Geraldine Brooks. David Liss. Matthew Pearl. (Dear God, Iain Pears. Just looking at Instance of the Fingerpost can give me a panic attack.)

I’m trying, though, to keep this panicky sense of inferiority tamped down. The little voice that whispers to me of my shortcomings, the voiceover to my Imposter Syndrome narrative, would like me to give up in the face of such daunting talent.

I like what Brene Brown, author of Daring Greatly, The Gifts of Imperfection, and The Power of Vulnerability (and She of the Much Downloaded TED Talk) has to say about comparison, shame, vulnerability, and creativity in this talk given at a 99U conference (for what it’s worth, Brown gave this talk a much more evocative title than that listed here–she called it “Sweaty Creatives”):

So I’ll return to some of my favorite advice from the lovely Neil Gaiman:

“Tell your story. Don’t try and tell the stories that other people can tell. Because [as a] starting writer, you always start out with other people’s voices — you’ve been reading other people for years… But, as quickly as you can, start telling the stories that only you can tell — because there will always be better writers than you, there will always be smarter writers than you … but you are the only you.”

Once more unto the breach.

Of Sloths, Demons, and Palindromic Numbers

When I hear the word “sloth,” I generally have a Kriston Bell moment. And I’m not alone. Sloths are enjoying a cultural surge, with sloth memes, sloth fan clubs, and even sloth socks (yes, I own a pair).

Culturally, though, we pay more attention to the cute little critter than we do to the other sloth, that of the Seven Deadly Sins.

The idea of sloth as a sin is complicated. Is sloth laziness? Sluggishness? Apathy? Is it a sin of omission rather than commission?

Scholars have pointed out that sloth has an antecedent in the medieval monastic term acedia,which referred to a sort of spiritual malaise. It was also termed the “noonday demon.” The nomenclature is perfect. We’ve all faced the noonday demon: that ennui that hits right around lunch, when our bellies are either rumbling with hunger or full and happy–either way, our thoughts go wandering and no work gets done. (For a modern take on the phenomenon, see this article from the New York Times, “Their Noonday Demons, and Ours,” ; and in this interview with Kathleen Norris, author of Acedia and Me: A Marriage, Monks, and a Writer’s Life,)

But whether sloth was characterized as spiritual torpor or a conscious decision to be a couch potato, the consensus was that sloth was A Very Bad Thing, worthy of its own demon. And, of course, the early modern period was happy to provide one.

According to the 16th-century German witch-hunter Peter Binsfeld, who classified the “Princes of Hell” according to the Seven Deadly Sins, the demon who best represented sloth was Belphegor (the name likely originates from the Moab god Baal-Peor).

(Note to readers about images of Belphegor:

Okay, so now here’s where things get a little weird. The demon Belphegor is also associated with a special kind of palindromic number called “Belphegor’s Prime”:

I have been unable to find any source explaining why this admittedly terrifying number would be associated with Belphegor. Obviously the number 13 and the 666 are considered to be “demonic,” but why that particular demon? Why not Satan, or Beezelbub, or Mammon? Does it have anything to do with the association between Belphegor and sloth, and if so, why? 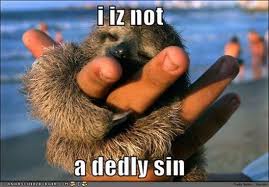