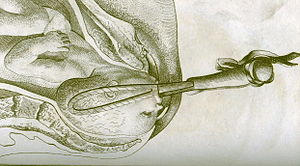 “Forceps.Smellie” by http://en.wikipedia.org/wiki/User:Ekem –  Licensed under Public domain via Wikimedia Commons –

While doing research, I often come across fascinating tidbits or though-provoking morsels I want to share.  For example, did you know midwives would sometimes place chunks of nutmeg or cloves on a laboring woman’s thigh, reasoning that the baby would be attracted to the delicious scent and want to make its way into the world?

Sometimes, though, I come across a story that infuriates me so much I want to scream out loud (generally not recommended in a library, by the way).  It’s for such occasions that I’m setting up the Vile-Hearted Renaissance Peckerhead of the Month Award.

The first of the candidates is one of two chaps named Peter Chamberlen, whom I stumbled upon while researching the childbirth preferences of Queen Henrietta Maria (1609-1669).  Peter and his brother Peter (and yes, I’m channeling Newhart here http://www.youtube.com/watch?v=TN6UAzYY8qg) were sons of a French Huguenot emigre who moved to England in 1576 to escape religious persecution.  The two Peters became midwives (yeah, I didn’t know there were male midwives in the Renaissance, either), and one of them (probably Peter the Elder, though nobody really knows) invented the obstetrical forceps.

Except not.  The bastard Peters kept their forceps invention secret for 150 years. They carried the forceps into the birthing room in a lined box, and they only brought them out after everyone had left the room and the laboring mother was blindfolded.

I was lucky, living in the 21st century, that there was no need for forceps in delivering my two beautiful children; both were born by c-section.  But I’m pretty sure that had I lived in the 17th century, my first delivery would have needed those forceps (the second wouldn’t have, because I would have died in the first).

I remember lying there helplessly, ashamed of feeling as though an alien being were ripping me apart (I absolutely could not think of her as a baby by that point), praying for anything to stop the pain, the fear.  I think of all those women of the Renaissance in that same position, women and children who could have survived with the skillful use of forceps to help along a delivery.

And those guys kept them secret, hidden in a box, as did Peter the Younger’s son, Dr. Peter (yes, again) Chamberlen, and Dr. Peter Chamberlen’s sons, Hugh, Paul, and John Chamberlen, who all joined in the family trade.  Hugh Chamberlen tried to sell the secret to the French govenment, but was sent away penniless when he failed to successfully deliver the baby of a woman with a severely deformed pelvis.

Finally, when Hugh Chamberlen’s son—named Hugh (yes, again) Chamberlen—having no male heirs to train up in the family trade, leaked the secret in the beginning of the 18th century.

So, for extreme selfishness costing the lives of countless women and children, the first Out of Time Blog’s Vile-Hearted Renaissance Peckerhead of the Month award goes to Peter Chamberlen.  Congratulations, asshole.

For more info on the Peters and Hughs Chamberlen: