My eldest daughter—burgeoning animal-rights activist and wannabe vegan (alas, she likes bacon and cheese too much to commit)—is supposed to do her first dissection soon in biology class.  She is not happy about it, and after some thought, I realized I wasn’t really either: with all of the virtual tools at our disposal, do we really need to kill animals and expose our kids to harsh chemicals for 7th-grade biology?

So I’m doing some prep to make a case to the school district for using a virtual program like Frogouts or McGraw Hill’s dissection tool.

This may be a moot point (as the school district may already have something in place as a substitution), but it got me to thinking again about the bizarre history of dissection practices and early instances of virtual dissection.  Unlike in current medical schools, where a cadaver is shared between three or four medical students, in the middle ages dissections occurred in a theater.  The actual cutting was performed by a surgeon—a relatively low-level practitioner who couldn’t claim the vaulted status of physician.  Guiding the surgeon was the professor of medicine, who sat on high and read from Galen, the undisputed ancient authority on medicine.  Actual physicians seldom (if ever) cut into a real body (there’s some discussion of this here), like this: 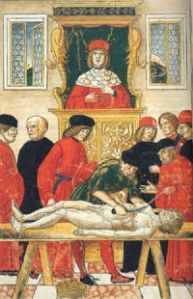 Illustration of a dissection from the Fasciculo di Medicina, ed by Johannes Ketham, 1493

In the Renaissance, a physician named Andreas Vesalius challenged Galen’s primacy and encouraged physicians and medical students to cut into the bodies themselves.  Though the idea caught like wildfire, there was a hitch: it was not easy (and often not lawful) to obtain human bodies for dissection.  At different times and in different places, those wanting to dissect a human body had to obtain them from professional grave-robbers who kept the anatomists in fresh bodies.

It is perhaps due to the desire to have first-hand experience, and the difficulty of getting fresh bodies, that there was a boon in the publication of what are called “fugitive sheets,” or what a professor of mine in grad school called “Renaissance pop-up books.”  Basically, they are anatomy books with illustrations that can be lifted and folded back to provide a sort of early modern virtual dissection.  Here’s a great example of a fugitive sheet from the Wellcome Collection:

Anatomical fugitive sheets of a skeleton, male figure and a female figure.  Wittenberg, 1573

(Really, you have, have, have to click on these to see them—they’re cool.)

And here it is in video form:

And if that is not the coolest thing you’ve seen all day, then . . . well, you have an amazing life.